What Shall We Call The Trip To Vegas?

The people in the bachelorette trip:

When things got crowded:

So, a long time ago, I was like "Here's how to make five-minute ice-cream!"

What a fool I was.

Little did I know that there was a way to make ice-cream WITH ONE INGREDIENT. It takes a little bit longer than five minutes, but only because you have to freeze something. Otherwise, it's dead easy.

Nope. (Thanks to thekitchn.com).

Here's what you do.

Peel and chop the banana.

Email ThisBlogThis!Share to TwitterShare to FacebookShare to Pinterest
Labels: Firstworldproblems, Hearts In My Eyes, Self-Documenting My Proud Foodie Creation, The Nervous Chef

Look ma! I'm on TV! On the Internet! In a Newspaper!

So, a very enterprising young student writer for the Arizona Daily Star, Samantha Munsey, interviewed me about thrifting after reading my Hello Giggles stuff, Adventures in Thrifting.

She does a near-magical job making me appear coherent, seeing as how I had driven back to Tucson from Illinois two days before and was literally leaving for Russia an hour after the interview. I'm hot, disheveled, wearing crooked glasses and say "Um," and "Like," many, many times (Toast Masters would not be proud).

Anyway, fabulous editing job Samantha! Seriously, I'm impressed, because I know how much I rambled and wandered around and how loud and crowded it was in there. There's also this really magical moment where I say, "I'm wearing a pink fluffy dress!" and the sleeve of said dress falls off my sloop-y shoulders.

But I was prepared, because after the interview I was so worried I looked deranged during the interview that I practiced talking into my iPhone camera in weird and embarrassing ways (lots of British and Southern accents and weird faces) and forced myself to watch them, to prepare for the worst.

But honestly, it was really fun to do the interview, Samantha Munsey was a peach, a professional peach, and I think she did an amazing job putting the video together.

Email ThisBlogThis!Share to TwitterShare to FacebookShare to Pinterest
Labels: Hearts In My Eyes, Hello Giggles, I Am A Self-Promotional Tool, Narcissism, Things People Thought About Things Wot I WROTE, This Shit Is Funny Check It Out

I guest-blogged in turn over at a lovely person's cooking blog. I rave about salad!

Thoughts for a Sunshiney Morning has something very special for you today: a guest-poster, Ivy Wilson! (Found here and here). This post involves Germany, yeast, and mushrooms. Or, as Ivy Wilson deems them, Teutonic Toadstools: 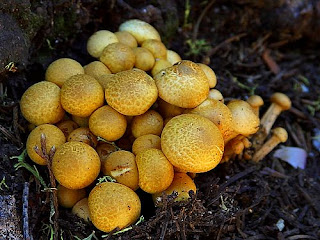 I’m not a great baker, but I know that bread is supposed to rise.  Now that I live in Germany and no longer have a full time job, I spend more of my day cooking that I did back in America.  When my bread dough didn’t rise, I blamed myself for getting the cheaper of the two yeast brands at the super market.  I promptly returned to the grocery store and purchased the more expensive yeast.  It was made by a well-known, high quality German brand, but it was dead too.

I consulted my most Martha Stewart of German women friends.  “Oh – the dry yeast in Germany is crap,” she said.  “Go for the fresh yeast.”  I don’t know what fresh yeast is, so I said to hell with this nonsense and baked a chicken instead.

But, there was one place that day in Germany where yeast was alive and well.  It had become itchily apparent that there was an overgrowth of yeast in my females.  I’d had a few yeast infections before, and I was well aware of the symptoms.  So – what’s the big deal – you might think.  Surely women in Germany have vaginas that occasionally get a little yeasty.  Surely they have drug stores in Germany.  Just go to one and buy a German yeast infection treatment.  Well, not so fast.

Email ThisBlogThis!Share to TwitterShare to FacebookShare to Pinterest
Labels: BLOGGITY BLOG STUFF, Guest Poster, This Shit Is Funny Check It Out, Travel Notes

CAN WE GO BACK TO THE DAYZ. Except not really.


Despite protestations that I was never going to attend a fair again (too many times going to fairs convinced I was going to have a good time, only to puke up blue cotton candy or spend an obscene sum of money to get sunburned and nauseated by beer and deep-fried snickers which seemed like an awesome combination at first but then my friends wanted to go ride a spin-y ride and then I got sick (FAIRS ARE BAD PLACES FOR THE WEAK OF STOMACH), or one time I got yelled at by a cop in the parking lot who slammed his hand down on my car and screamed "DON'T YOU KNOW THE RULES OF DRIVING IN MINNESOTA??" -- this is what fairs do to people), I was easily persuaded to attend the Pima County Fair with @theKFoss by 1) The promise of a free admission pass and 2) Being told that Boyz II Men were the featured entertainers.

Of course, I remembered almost immediately a reason I do stay away from fairs: rides that make can me pukey and discriminate against odd numbers:


It was also quite hot at first -- I guess it was the earliest day on record that Tucson has hit 100 degrees.


But gradually, as it became clear that I wasn't going to puke up blue cotton candy or cry over being a single rider (vast improvement over fairs of teenager-hood), I began to enjoy myself. Night fell, and night has the magical ability to turn to fairs from depressing places to magical, neon-lit tabernacles of delight.


Plus, there are funny signs. 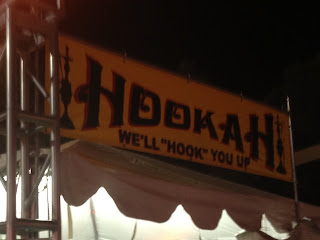 Email ThisBlogThis!Share to TwitterShare to FacebookShare to Pinterest
Labels: Fears N Phobias, Firstworldproblems, Hearts In My Eyes, Photo Essay, Signs of Life, The World Is Blue Like An Orange, This Shit Is Funny Check It Out

The Semi-Vegan Returns to Meagan Another Day

More vegan eats! (From someone who is not actually a vegan, she just plays one at home).


Me and my room had some friends over for dinner and decided to make some vegan sushi. As with our holiday party, we went a wee bit overboard while shopping and prepared about eight million different kinds of ingredients.


The basics of making sushi rolls: not actually that hard: prepare rice with rice vinegar; spread a row of said rice of some nori; spread ingredients lengthwise on the rice; roll with a sushi mat; chop roll; eat with soy sauce and wasabi.


What's challenging about making sushi with fish is, you know, learning how to chop up raw fish so that you don't end up contracting an intestinal parasite that grows to be the size of your lower intestine.


What's challenging about making vegetarian sushi is managing to combine vegetarian ingredients in a way that's flavorful enough to come through and taste interesting (Easier said than done: the rice and nori cover up a powerful amount of flavors. And I love rice and nori, but...you need a little pizzaz to your sushi roll, you know?).


So, in essence, there way a lot of prep work involved. We used Brigid Treloar's Vegetarian Sushi (Essential Kitchen Series) which helped provide some ideas.


There was a lot of chopping:

If you're wondering why the above veggies looked so pretty, it's because my roommate chopped them with a mandoline. I'm scared of that thing and won't touch it. It makes such pretty, pretty vegetables though.