I can haz analysis!

A cool thing to turn up when self-googling to see if a review had been posted. It hadn't, but I found this!
Posted by Easy O at 3:50 PM No comments:

This is where I draw the line

Okay, so I obviously waxed fulsome below about my love for Twizzlers and Red Vines. Also, I love chocolate (to further underscore the cliche, I especially love chocolate during my bouts with PMS. Suck it, stereotypes).

But this is where I draw the line: 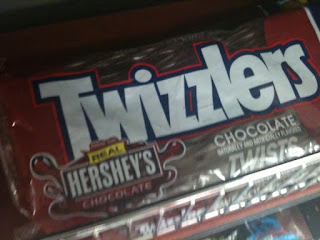 I mean, maybe I'll try them and they'll be delicious. But the thought makes me gag. Two great tastes that I can't imagine tasting great together. On the other hand, Hershey's chocolate already tastes like wax, which is the texture that Twizzlers aim for, so maybe it was inevitable...

Have rediscovered Aimee Mann recently, who brings my two obsessions together in a haunting, lovely way:

Okay, am posting some cooking stuff, which is quite hilarious, considering that last semester my diet consisted mostly of:

-Red Vines and Twizzlers*
-Starbucks. Yes, all of it.
-The occasional salad
-Sushi from my University-where-I-teach's quick "to go" food store
-Yogurt

I made these pancakes I THINK over winter break? They are from, to continue my trend of making things from sources I'm slightly embarrassed about, this site. Even though she says annoying things like "I prefer mini sizes...it feels like more when it is less," I still like this recipe. I was pretty faithful to the recipe, except that I didn't have quite enough ricotta (and I think it is all needed -- in this case, it tastes like less when it is less), I didn't use the poppyseeds (not wanting to fail any Opium drug tests - HA HA HA HA HA SEINFELD LOL), and I didn't use the lemon zest, which I regret.

I have a tendency to skip adding zest, because I am lazy, and it seems like a pain. But I guess often you need it -- me and my mom used to make this chocolate orange pudding every Christmas; it was pretty much the only dessert ever made or consumed in my household and thus a big deal. I'll put the recipe up sometime. You were supposed to add orange zest, along with orange liqueur. I never really liked having the texture of the orange zest in the pudding -- puddings are supposed to be smooth, no? So, one year, we were having a guest for Christmas dinner that was kind of an insanely good cook and, wanting to be impressive, I suggested leaving out the zest. The pudding was duly served, and our foodie friend delicately ate some and looked unimpressed.

"It's...there's something missing," he ventured.

"Well, you're supposed to put in orange zest," my mother eagerly bursts in, "but LAURA--"

"Yes! That's exactly it! Some orange zest would add just the perfect flavor!" Foodie friends face lights up in a smile.

So, put in the zest, people. In this case, I think it needs it, too. The egg whites give the the pancakes this extremely nice lightness -- you can eat a bunch without feeling like you've eaten the entire world, a la normal pancakes. But without zest, I could almost taste the egg whites TOO much -- I think the zest (and more ricotta) would make the insides a little more substantial and less cloud-like. Plus, more lemon flavor is always a good thing. I don't know why, but lemon + pancakes = yum. One of my favorite pancakes toppings is a squirt of lemon juice with powdered sugar. 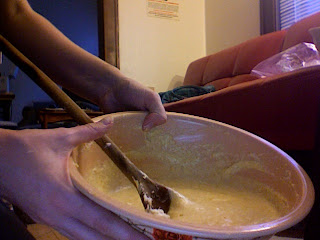 Here's my SUPER-AWESOME pancake flipper. I found it at a church jumble sale with Emily F., who didn't understand my excitement. Neither has anyone else I've shown it to. I don't care -- it's awesome. It helps me flip pancakes. I love it: 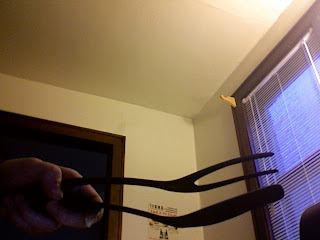 And here's the final result! With some honey. I ate up all my berries before they were done, but I bet fresh berries would be awesome: 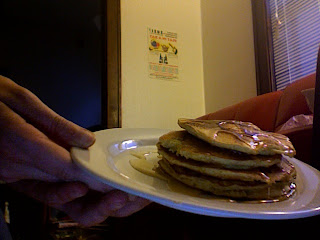 * Red vines: watching TV while doing something else, I heard the song for a commercial: something about "you're my one true love...blah blah blah" and I had a quick thought, along the lines of "God, why does our culture sell this relentless ideal of the ONE true love, when in reality it's much more complicated and prosaic than--" I looked up, and saw the commercial was for Red Vines, and thought, "Oh, but that is how I feel about Red Vines."

But, here's the terrible thing: I don't think I do love Red Vines more than anyone else, not anymore. I've been having an affair with Twizzlers for quite some time. It started out of convenience -- the CVS near my apartment stocked Twizzlers and not Red Vines. And then I got TMJ, and Red Vines are a little hard on the ol' jaw. And Twizzlers Pull N Peel is much easier on the jaw, and also fun to eat, and better tasting than regular Twizzlers... 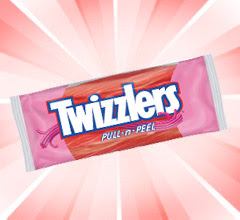 So I can't even commit to Red Vines. See: problems, serious.
Posted by Easy O at 6:37 PM No comments: