Okay, being technologically deficient, I am the last person in the world who DOES NOT own a digital camera (and nope, not even a camera on my phone). This means, that these days I barely count as a blogger.

It means that I can't show you pictures of my new yogurt maker (!) and the greek yogurt it made for me.

I can, however, link you to this food blog (which doesn't really need my wee little link) and tell you that I'M EATING THE KUGEL IN THAT PICTURE RIGHT NOW. That's right, bitches. It's so meta it kills me.

I can also link you here, because the Divine Miss M is Divine.

I can also link you here, to pretty, pretty issue #5, where my story "Grillz" is published and ready to ship out.

So, that's some pictures, right?

In good news, my phone provider, Altell (which I like to affectionately refer to as the RC cola of service providers) has been bought-en out by Verizon (the Pepsi-Cola of service providers?), which MAY result in things looking up in the technology department for ol' Easy O. So we shall just have to wait with breath that is bated.
Posted by Easy O at 10:57 AM 1 comment:

Email ThisBlogThis!Share to TwitterShare to FacebookShare to Pinterest
Labels: The Nervous Chef, This Shit Is Funny Check It Out, Thoughts About Things I Didn't Write

Why, in fact, sometimes you SHOULD go off on people

Arriving at my teachin' job yesterday at the insanely early hour at which this is required, I was lucky enough to grab a parking space on the street outside my building (the fact that I have an insanely early class is the only reason this is possible and even then it is tricky).

As I parked, I sat in my car for an extra minute (don't know -- probably staring into space [see: hour, insane earliness of] ). I noticed another -- large -- car pulling in behind me. Wanting to make sure I allowed the car enough room, I pulled up respectably close to the car parked in front of me. As space is at a premium, I wanted to make sure we all took advantage of it. I was surprised and annoyed to see the car in back of me park while leaving a solid four/five feet of room between my car and their's. Getting out, I couldn't help but feel annoyed (assisted, no doubt, by hour, insane earliness of). At least one more, maybe two more, cars could have parked along that stretch; now, it was maxed out. I thought about saying something, but the man was an older gentleman in a suit and for all I knew he could, like, actually be my Dean or another instructor in my department or something. Plus, I hate those people who are so obsessed with efficiency that they feel entitled to yell at others if someone else doesn't conform to their exact idea of the best way to do things. I myself am not the world's best parker or driver, and I know I piss people off without meaning to all the time. Glass driving, don't throw verbal stones, etc.

As I walked towards work, I noticed the man meet up with another man and they each started routing through a cardboard box. As I walked past them, one man offered me a New Testament in small, vomit-green color. I said "no" instinctively and then muttered an incoherent "and tell your friend to...park...mutter....room..." and kept walking.

As I took a few small steps further, comprehension started to dawn. Okay, not only were these men NOT in fact employees, students, parents of students, etc., they were FUCKING PROSELYTIZERS. And A FUCKING PROSELYTIZER TOOK UP NOT ONE, BUT TWO, PREMIUM PARKING SPOTS AT THE PLACE WHERE I WORK.

And as I walked, I got madder and madder. And more mad and more mad. And I decided, fuck it. See hour, insane earliness of. And so I walked back. I tripped on my heels a bit as I walked over, and the men saw me. But luckily this was walking to them, not walking away.

"Hi," I said to them. "Me again. Are you affiliated with the university?"

Just wanted to check that they weren't, you know, part of a student faith group or something, which would be a bit different.

The man didn't answer the question (evasive, changing the subject -- confirmation of my suspicions), saying, "We're from the Gideon society."

Okay, hotels, Gideon bibles, got it, I think.

"See your car over there?" I say. "See how's it four feet behind MY car, the purplish/bluish one? You're left all the space and now no one else can park there. That's a spot that students or people who actually work here could use."

The man gets all cutesy and condescending to me. "Well you see," he says, "little lady" unsaid but hanging in the air, "if I'd parked as close as YOU parked to the car in front of YOU then you wouldn't have been able to get out."

"I could get out just fine!" I say, for a moment not quite understanding him.

"Have a nice day," he says, once again employing the "let's condescendingly change the subject and not actually address the subject" tactic.

I wish I'd ended the exchange in a more dignified way, explaining that no one who isn't disabled/disturbed would have trouble backing out of a space with a QUARTER of the space he had "politely" left me. And that it's actually polite to park a little tightly and make sure the maximum amount of people can use an area where demand is really, really high. ESPECIALLY IF YOU DON'T WORK THERE. AND ARE THERE ESPECIALLY TO SPREAD RELIGIOUS BELIEFS ON A CAMPUS THAT IS PUBLICLY FUNDED.

What I really wish I'd said was this:

"Oh, I'm sorry. Am I annoying you? Is it annoying when someone comes up to you while you're trying to do something else and forces their opinion on you? Yeah. Think about that."
Posted by Easy O at 8:44 AM No comments:

For this week and this week only, I'm being featured on mnartists! Thought I'd link, even if it's brief, and also to acknowledge that they are awesome and not only is my name now correct, there's also this nice stuff about me up.

I also found out that in November I'm to be published here, which makes me apoplectic with joy.
Posted by Easy O at 12:23 PM No comments:

These are pictures from a little over a year ago, when I was up in Muskoka with my uncle and aunt.

We made homemade sushi! Wasn't it pretty? 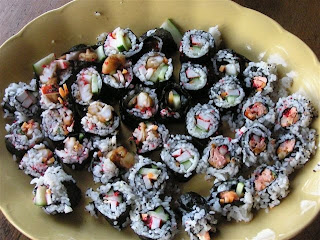 I actually don't remember what this was:
[ETA: This is obviously the seven-layer dip, photo taken from above. DUH!] 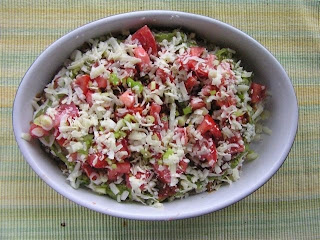 We also made seven layer dip: 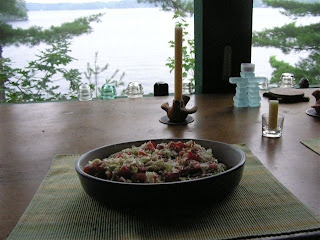 Sigh. Looking at these pictures makes me nostalgic, though I'm not precisely sure for what.

Is always weird to see pictures from a year ago, I s'ppose (Dude! Didn't put up pictures of me, but - I look different. Shorter hair, not a red-head, thinner, and hey -- good news! Invisalign works! Bye, bye snaggle tooth. I was all, "Oh, look at little me! I look so young!" and then I was like, that was a year ago. Huh.)

I dunno. Is silly, obviously. Life is not hanging out in your summer cottage, writing, swimming, and making homemade sushi. Although that was very nice.

If you want to check out a real food blog, check out "Instead of the novel..." at right. Pretty pictures of food!
Posted by Easy O at 1:26 PM No comments:

Yes, I teach impressionable young-ish minds, and theoretically write books and other literary-type things, but there's something important you should know about me, and that is that I'm completely obsessed with the legendary Ms. Britney Spears.

I've been "outing" myself more and more recently, so this won't be news to most of you...I have long, complicated thoughts and theories about why I love Ms. Britney so much, and that's matter for another day. It has a lot to do, as most pop culture obsessions do, with growing up in the particular cultural moment that I have, and the fact that Britney, as a celebrity, has come to mean and stand for lots of things, both to the culture and to me personally. To explain my complicated feelings -- which in the past, have consisted of envy, disgust, admiration, morbid fascination, schandenfreude, pity, admiration, frustration, and now mostly consist of "You go, girl!" -- would take a long time and involve sharing lots of complicated stuff about myself.

So for now, I'll just explain what I love about the following clip from a Britney concert.

1) The fact that, a few days ago, feeling grumpy and stressed, I decided that the ONLY thing that would make me feel better would be to watch Britney dance to "Toxic."

2) The fact that, at first, seeing the midriff baring and tight bright pants, I was like, "Oh an old Britney clip" only to realize that in fact this is from her concert like LAST WEEK. This is CURRENT Britney, people. AMAZING! She's looks great!

3) The fact that she STILL wears freaking midriff tops CONSTANTLY despite the fact that the fad has long past and that, although she's got a nice tummy these days, it's not the scary-buff abs of yore. It's like she's stuck a little in 1999, which is both sweet and sad.

4) But, snideness aside, her abs and body do look great. She jumps all around and there's NO BOUNCING of her tummy. It's all muscle. I shudder to think what would happen if I jumped around in a midriff-baring shirt, under bright lights, no less. Lord.

5) OH MY GOD SHE'S WEARING GLASSES! Girl is dancing in glasses! And has to adjust them during the routine. It might be the cutest thing ever.

6) Her TERRIBLE hair. This makes me feel so bad for Britney. Girl has no hair! She's dyed it so much and had so many extensions that she has very little real hair left. And despite being a millionaire many times over, her weaves almost always look ratty. But I kind of love that. Do you know how long it takes to sit in a stupid chair and get all those extensions put in? I might be like, "Fuck it, I'm putting in a sloppy bun," too. And I absolutely would have shaved my head, too. Am I the only one to whom that particular piece of Britney-madness made complete sense? YEARS of painful dye and extensions and wigs that have WRECKED your hair and EVERYONE makes fun of you about it. I'd buzz it off during a divorce, too. For realz.

7) Her dancing! Maybe not up to prime-of-Britney, but energetic and she looks like she's having fun.

8) The fact that Britney inspires me to dance and to have to fun with it. Yes, that's super-cheesy, I know. But true. And I'm not alone. There's a documentary called "How Britney Spears Saved My Life." Seriously. I wouldn't go that far, but I think it's sweet. Even the filmmaker was a convert.

Do your thing, Britney: