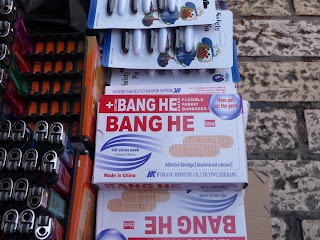 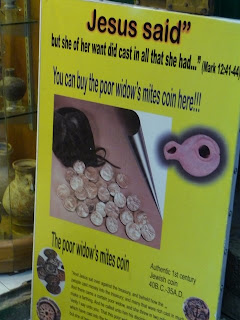 In New York, I discovered that if you buy T-Mobile, you can avoid Sin! 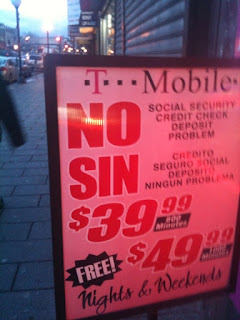 A gas station in Wisconsin that I pass on the way to work every day -- well, they sell Freedom: 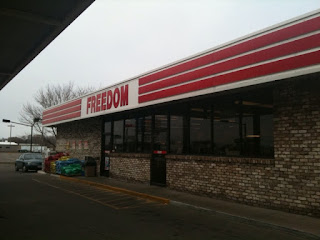 Yes, we will all have to pay at the pump for Freedom, America: 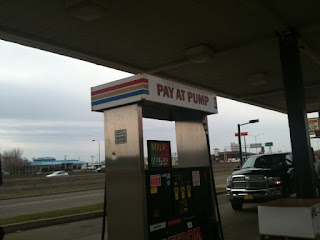 And, back in suburban Minnesota...well, this just sounds dirty: 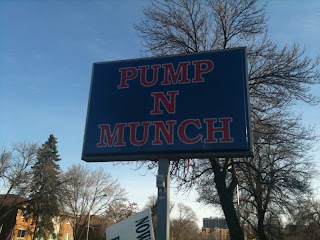 Email ThisBlogThis!Share to TwitterShare to FacebookShare to Pinterest
Labels: Signs of Life

Okay, the title is not a slight at my Dad for being old, but simply that this post is old. It's my Dad's quite hilarious account of spending Christmas Eve in Bethlehem -- you know, back forever ago when we spent Winter Break in Jerusalem.

I didn't end up going to Bethlehem, as I was feeling crappy and simply went back to our short term rental apartment in Jerusalem to go to bed. My parents came back at about late at night, pale and trembling. Here's what my dad wrote about the trip:


Julia arranged in advance for us to go to Bethlehem on Christmas Eve, with St. George’s church in Jerusalem. It is the Anglican church in East Jerusalem, an easy walk from the Damascus Gate. It has an English and an Arabic congregation. Bethlehem used to be a sleepy Arab village, near Jerusalem. It is now one of the fenced in Palestinian areas, under the Palestinian Authority.

We needed to be at St. George’s by 7 pm, and arrived well before. People began to arrive en masse about 6.45. Our leader, Father Bob, was a huge man, wearing a bright red beret. These turned out to be valuable attributes. He greeted us jocularly, and we started to get on the buses. Each person had to identify themselves as they got on the bus, and have their names checked against a pre-established list. There was a waiting list, and I have no idea how many of them got a seat. As our names were checked off, we were given a badge and we were told to display it in easily visible place. This, like the red beret, turned out to be crucial. We had been told earlier to bring our passports, although it turned out we didn’t need them. I still don’t know whether we might have needed them to prove that we weren’t Israelis going into Bethlehem, or that we weren’t Palestinians coming out. The careful procedure was followed as each person got on the bus, and the third bus was delayed in arriving, making for a tedious wait. Finally, we were given our marching orders: Display your badge prominently, keep together when we got off the bus. Walk briskly together straight to the church. Don’t dawdle or stop for something to eat or drink. Look friendly but avoid eye contact. Return straight to the bus after the service. The bus will not wait.

Father Bob’s large and comforting figure took the seat immediately in front of us. His cell phone was constantly ringing. He always answered “Ho Ho Ho. Merry Christmas. Father Bob speaking.” * The calls were all from people in Jerusalem and Bethlehem keeping track of our progress. About a kilometer or two from Bethlehem, all three buses pulled over. We were assured this was a planned stop, to pick up an escort. We soon got back on the road and the escort turned out to be a HumVee flying two large Israeli flags. This did not make me feel safer.
Soon we drew up to a huge wall, made up of prefabricated slabs colored a drab beige. We stopped, and were briefly investigated by a border guard. We were then ushered through the gate, apparently made extra large for the influx of visitors on Christmas Eve. It turned out that about twice as many pilgrims came as were expected.

From then on it was utter chaos. The environment entirely changed as we went through the gate. The traffic was gridlocked; it took us 45 minutes to inch our way a few hundred meters to the bus depot. The streets were garishly lit, and full of people, some going about their business, some tending their shop or restaurant, most young males just lounging around. The scene was in the manner of most border towns: souvenir shops and cafes. Many people smiled and waved at us, yelling out “Merry Christmas”. Father Bob said, “Smile, but don’t encourage them!” **

We eventually got to the bus terminal, down a hill and around a sharp corner. We pulled into the half empty, underground bus depot. I wanted to make a joke about never realizing that Jesus Christ Our Lord was born in a parking lot. When we stopped, we were told again: stay together, go straight to the church, don’t stop, return straight to the bus afterwards, display your badge prominently at all times. We climbed out of the buses, left the bus terminal, and started to walk up the hill and around the corner to Manger Square and the Church of the Nativity. The streets were full, and got more crowded as we approached the church. Our group soon spread out, and it was impossible to tell if the person you were following was a member, as we all wore our badges on our front. It was here that Father Bob’s stature and red beret proved invaluable, as you easily see his large red-topped figure moving confidently through the crowd.

More and more Palestinian soldiers were in evidence; their uniforms were entirely black, from their helmets to their boots. And most had machine guns slung over their shoulders or carried at the ready. As we approached the church, thousands of pilgrims jammed up against crowd control fences, with ranks of armed soldiers manning the fences. Behind us in the square, there were loud celebrations that were, as far I could tell, entirely independent of Christmas and the pilgrims. I think it was a Palestinian rock concert, and I was fairly sure I was hallucinating when I thought I saw and heard boy scouts playing bag-pipes. This turned out to be a Palestinian tradition.

Father Bob started to wave his red beret, and shout “St George’s, St. George’s”, and eventually, “Let’s go!” One of the security gates was drawn back, and a group of soldiers formed a gauntlet through which only people wearing St. George’s badges were allowed. There were thousands of people crammed together, all waiting to get into the church. Although they didn’t rush the opening, they didn’t exactly fall back to let us through, either. It was only by pushing and being pushed that we made progress.

Things were complicated by the fact that there were two-and-a-half high concrete bollards at various places, and as one was pushed against such a thing, one had to make artful, or clumsy, adjustments to get around it. As we arrived at the gap in the security fence, several nervous young men, armed and uniformed, looked anxiously for our badges, which we equally anxiously displayed. Emerging into the empty spaces between the security gates and the church, we hurried up to the latter. We entered the nave, but rather to my surprise, we didn’t stop there, but were ushered through to an empty courtyard. I have only the vaguest of memories of what the interior of the church looked like. None of the pictures of the Church of the Nativity look familiar. After many of us had gathered in the courtyard, we ducked through a four-foot doorway into a small chapel. Here I finally realized that we weren’t going to a Christmas Eve service in the church, for which St. George’s had a few places reserved, but to a small carol service, put on for St. George’s alone. For all I know, there were dozens of other such special services put on. In fact, there probably wasn’t a Christmas Eve service in the Church of the Nativity at all that evening. The Church of the Nativity is an Orthodox church, and they celebrate Christmas at a later date. The big Christmas Eve service on Dec 24 was probably held in the nearby St. Catherine’s, which is Roman Catholic. I should have thought of all this before. In Jerusalem, the western churches (Roman Catholic, Lutheran, Episcopal; I didn’t notice any others) were very much in the minority, even among Christians. There were several varieties of Orthodox, Coptic, and Armenian churches in bewildering variety. For instance, the main Armenian church (in fact a cathedral, I think) is St. James, in a large monastery in the Armenian quarter. But there is also an Armenian Catholic church, with the wonderful name of “our Lady of the Spasm”, on the Via Dolorosa.

The carol service itself was very simple: eight lessons and about a dozen carols (no choir or accompaniment). The service was all very familiar, except one of the lessons was in Greek (read by, I think, the Greek Orthodox Patriarch of Jerusalem), and one of the hymns was in Arabic. The Anglican bishop of Jerusalem, Suheil Tawani, read one of lessons, and read a long prayer on behalf of Palestinian Christians. This latter was in part to thank the President of the Palestinian Authority, Mahmoud Abbas. Rather to our surprise, he was present for at least part of the service (who was present for at least part of the service, rather to our surprise). The service took about 45 minutes, and then we left the chapel, and the church. Now the crowd was even larger, and the Palestinians partied on in Manger Square. Father Bob and another leader (a Palestinian, I think) tried to persuade the soldier in charge to let us return another way. He decided against it, and we once again surged through a gap in the security gate, this time into rather than away from the crowd. It was easier, somehow. We easily got back to the bus about 10 pm, and I even had time to buy a glass of tea from a young boy manning a stand in the bus terminal. ***

All in all, I am extremely glad to have gone to Bethlehem on Christmas Eve. It was quite an experience, though I don’t think I would describe it as spiritual.

* My note: What is up with Father Bob?

** Seriously, what is up with Father Bob?

*** My dad drinks tea approximately every five seconds. Or coffee. Think I drink a lot of coffee and tea? Haven't met my dad. My dad is kind of the best.

My dad didn't take any pictures at Bethlehem. Here, instead, is a picture of my mom and me, at the Dome of the Rock/site of the second temple/end of the world: